The Domestic Asset Protection Trust (DAPT) is an irrevocable trust. We create such a trust under specific statues crafted to keep assets from creditors. The DAPT is available to allow the trust creator to transfer property or assets to the trust for safekeeping.

Settlors of the DAPT are able to put asset in the trust for themselves, spouses, children, and others. When they do, the trust can protect assets for the long haul. The DAPT assigns an independent trustee to the trust. The trustee can distribute assets to the beneficiaries as specified by the creator of the trust. To clarify once again, the creator or “settlor” of the DAPT can also be one of the beneficiaries of this trust. As such, we also call it a “self-settled trust.”

These trusts act as financial fortress to shelter assets from future creditors. Additionally, the settlors can benefit from statutes that can separate trust assets from the settlor’s estate. Even if the settlor receives distributions from the trust, the trust can still protect assets from lawsuits against the settlor – magical. How does the trust hold creditors at bay? It is because he assets now belong to the trust. The trust, in turn, is a separate unit from the original owner.

Currently, domestic asset protection trusts are of available in the following states: West Virginia, Mississippi, Ohio, Virginia, Hawaii, New Hampshire, Tennessee, Wyoming, Missouri, South Dakota, Oklahoma, Utah, Nevada, Rhode Island, Delaware and Alaska. If you live in Delaware, you probably would want to establish a Delaware DAPT. If you live in Nevada, you probably want a Nevada DAPT. That said, there exist some big differences in the protection offered in each state.

Of all states that currently offer irrevocable asset protection trust statutes, Nevada is currently the winner. Here is how is works. One creates a trust. Then they fund the trust with assets. These two facts are now published in a newspaper somewhere in Nevada. Voilà, after six months the creditor’s clock has expired for taking these assets out of the trust. See more below. 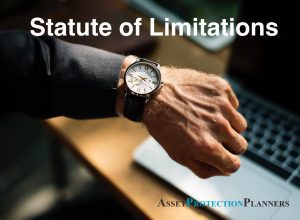 Statute of Limitations May Apply to the Irrevocable Trust – Sorry Creditor

A statute of limitations is a literal limit on how long the creditor has to file a lawsuit. This limit created a deadline for brining litigation to get assets out of a trust once someone has established and funded the trust. The DAPT trust statute of limitations is four years after the transfer occurs in most states, including Alaska, Colorado, Delaware, Mississippi, Missouri, Nevada (six months if the transfer is published), New Hampshire, Oklahoma, Rhode Island, Tennessee, Utah, Virginia and Wyoming. It is two years in Mississippi, Nevada, Tennessee and South Dakota, and eighteen months in the state of Ohio.

The disadvantages of domestic asset protection trusts over offshore ones are as follows:

So, if you want to use an irrevocable trust to protect assets from lawsuits, the offshore trust has shown, time and time again, be one of the, if not the most effective tools for shielding wealth from creditors.